Skip to content
By May 2018, the construction of the Xiong'an New District had been more than a year ago. With the establishment of the New District, domestic truck manufacturers have also competed in the hot spots of Xiong'an and arranged their own flagship products. . For Weichai, providing the engine products for the entire vehicle company promoted in Xiong, as well as the provision of good service, is only the basic function of Weifang to help the construction of the new district. More importantly, Weichai will also inject the indispensable â€œsoft powerâ€ for the development of the new districtâ€”a high-quality new era trucker.

On May 9, 2018, the 2018 Weichai Truck Power Product Knowledge Contest featuring the theme of â€œHeartâ€ was officially launched in Xiong'an. In this season's competition, Weichai will create a new image of a new era of truck youth as the game's vision, and Xiong'an is a city that has been placed in boundless hope. At the same time, the selection of the second season in the Xiong'an as a starting point also fully demonstrated that Weichai will be determined to build a new district in the long term. 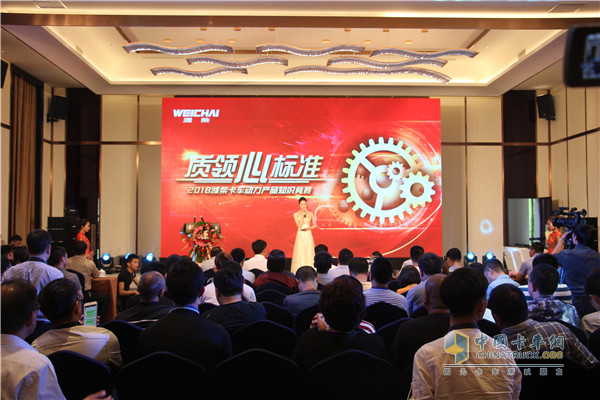 Only doing innovation leads to not copying events.

In 2017, in order to better demonstrate the high quality and youthful image of truckers in the new era, we established a good interactive relationship between Weichai and customers, customers, and dealers. Weichai built the â€œheartâ€ standard truck power product knowledge. The platform for this race invites truckers from all over the country to compete on the same platform to show the unique charm of truckers. Since the start of the event, it has attracted more than 40,000 truckers to participate in the event. The online network has awards, offline challenge competitions and other activities. The truckmen of the new era have demonstrated to the industry the image of a new truckman named â€œCulture and Civilizationâ€.

Also in 2017, the country established Xiong'an New District, and Weichai will also strive to achieve high-quality development in the new era. In 2017, Weichai released the 2020-2030 strategy, proposing that the traditional business should surpass the world-class level by 2020: By 2030, the new energy business must lead the global industry development, with a revenue of 100 billion US dollars, and build a respected internationalization. The company has become a Fortune 500 group with continuous improvement in competitiveness.

With this as a starting point, Weichai has fully started a new journey that leads and leads the high end in 2018. The event was held on the one hand to allow more customers to understand Weichai, trust Weichai, and select Weichai, as well as provide a platform for self-monitoring and self-improvement for truckers in the new era. In the future, Weichai will continue to uphold the core values â€‹â€‹of customer satisfaction, create the most quality, core technology and cost-competitive products, create maximum value for customers, and jointly make new contributions to the high quality development of the Chinese truck industry.

â€œOnly do innovation and lead, not follow and copy.â€ For Weichai truck power product knowledge contest, Cao Maobo, deputy secretary of Weichai Marketing Party and Deputy Minister of Marketing, said at the scene, â€œWhether it is a product or a market, As a leading engine manufacturer in China, Weichai has the responsibility and obligation to redefine the current image of domestic truckers.Based on this, Weichai has held two consecutive knowledge contests to provide a platform for new truckers to build a new image. â€ 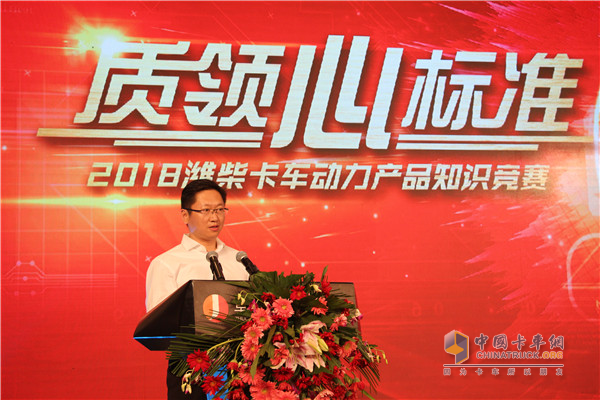 â€œAt present, Chinaâ€™s truck audience is mainly concentrated in the post-85s. Unlike the original truck drivers, the current users are very concerned about the Internet. At the same time, Weichaiâ€™s product lines are more abundant than before, and many new product advantages and operating skills are also available. Can not be quickly popularized offline, so Weichai decided to adopt the fun way to spread the Weichai brand, through holding knowledge contests and online answering activities, so that more users understand Weichai's products with the highest efficiency, which is also Chai innovatively organized the original intention of the knowledge competition."

The first leg of the match is more than worth winning

The China Truck Network reporter learned at the scene that this season Weichai truck power product knowledge competition is divided into five major competition areas. Xiong'an New District is the first stop of this tournament, and the other four stations are Hangzhou, Lanzhou, Kunming and Nanchang. At the same time, each station of the current game is divided into individual time-bound questions and individual rounds of answering and answering. The scores of the two rounds are added together, and the winner of the sub-race is the runner-up runner-up. The top three teams are formed. 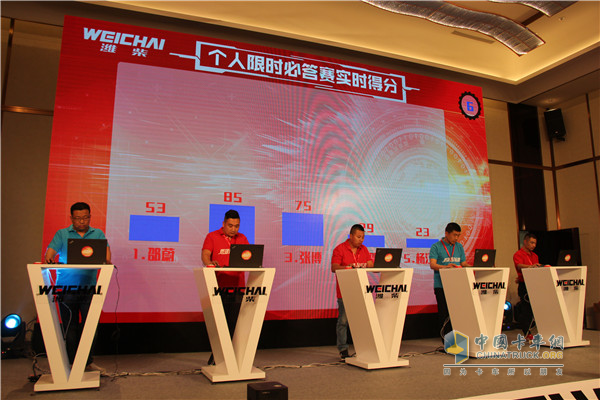 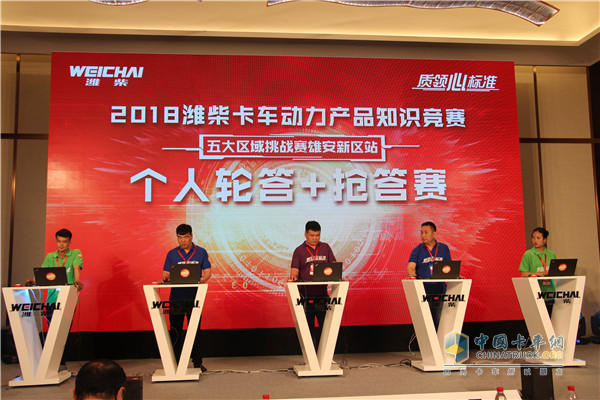 The reporter learned at the scene that Wang Dongdong entered the transportation industry in 2013 and worked on large-scale transportation in Taiyuan. He has already purchased 5 tractors equipped with Weichai engines, and has purchased 15 Weichai vehicles through friends he introduced himself. Tractors. From the reporterâ€™s point of view, Wang Dongdong is not only the iron powder of Weichai, but also the propaganda personnel of Weichai in the user terminal. 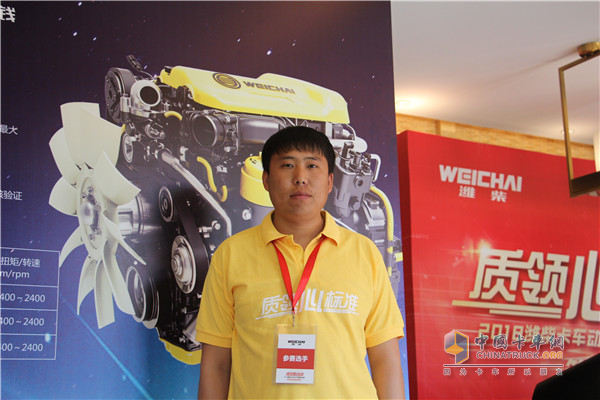 Wang Dongdong said: â€œThrough the 2017 competition, I feel that I know more about Weichai. When I introduce products to other people, I can say more specifically, and can explain the product advantages of Weichai relatively accurately. It is possible that the service station will introduce Users donâ€™t believe it, and Iâ€™ll give you an introduction. Users will believe that after the game, they are more willing to promote Weichai engines in their friendsâ€™ circles.â€

"This year, after participating in the competitions recommended by the service station, I was also very concerned about the mentality of participation. It was mainly because I wanted to use this event to enhance my understanding of Weichai products. I also had the opportunity to get together with Weichai. The user's in-depth exchange of experience in use is one of the most important points in my participation in the knowledge contest in Weichai,â€ Wang Dongdong told reporters.

After two rounds of fierce competition, the top three of the 2018 Weichai truck power product knowledge competition in the Xiong'an Division were won by Jia Lizhi, Wang Hua and Zhang Zhihui. The trio not only won cash prizes of RMB 10,000, RMB 5,000 and RMB 3,000, but also took the lead in the finals of the current tournament. 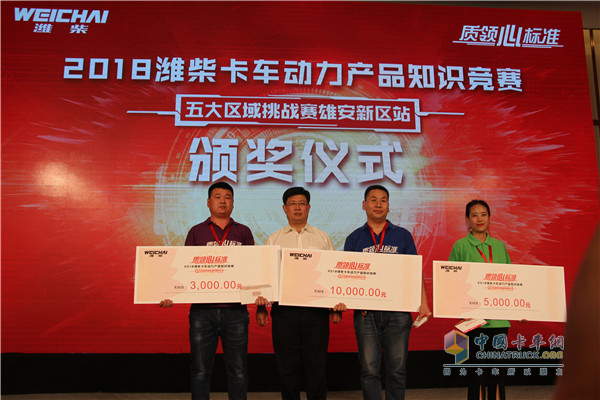 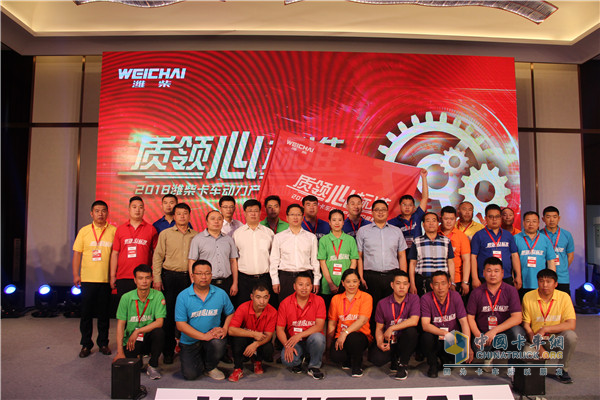 At this point, the 2018 Weichai truck power product knowledge contest first stood in Xiong'an victory, the second race will soon move to Jiangnan in June, to Hangzhou. What surprises can the contestants in the Hangzhou Division bring to us? We look forward to it!