The background and signification of research this program

As plastic has been used for all other industry widely, they are playing an important role in the development of our economy, but plastic did not easy to broken after being used and it becomes a big pollution for our environment .Therefore it is urgent to process those waste material without pollution.

In addition ,as the fastest development of world economy ,the shortage of petroleum will be urgent more and more .even the expert had stated that it will have no petroleum recover in earth after 15 years later, so searching the new resource becomes an issue which is concerned by all the countries of the world.

so it have great meaning of settle this program ,which can recycled waste material like plastic into resources without any pollution.

First, the raw materials are put into the reactor, and then seal the feeding in door, later start the machine and the reactor will be rotating and heated by coal, natural gas, wood or electricity. When the temperature reaches the degree of 250 to 280, we will get the crude oil, the oil steam will be continuous produced until the temperature reaches 350-460 C; oil steam will flow through oil gas separator, light component will enter the condensers and meanwhile the heavy oil will be discharged automatically into in heavy oil tank. The liquefied part will be condensed as crude oil, and the part which cannot be liquefied will be transferred by the water seal back to the burning chamber to be reused as heating material. 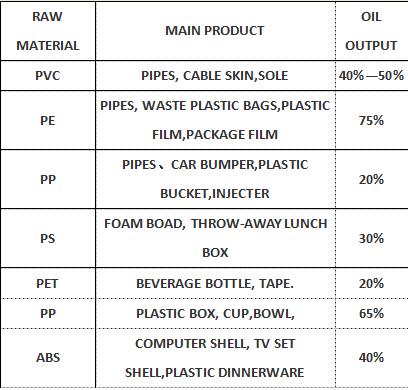