Skip to content
On April 2, 2019, the website of the Equipment Industry Department of the Ministry of Industry and Information Technology released four new energy vehicle subsidy liquidation final review vehicle information sheets and one pre-dumping review of subsidy funds, with a total audit subsidy of 31 billion.

Among them, nearly 19.6 billion is the final review of subsidy liquidation in 2015 and the previous year, 2016, 2016, and 2017 supplementary declaration, which can be regarded as dust settled. With the subsidy policy, major battery manufacturers began to carry out their big moves. 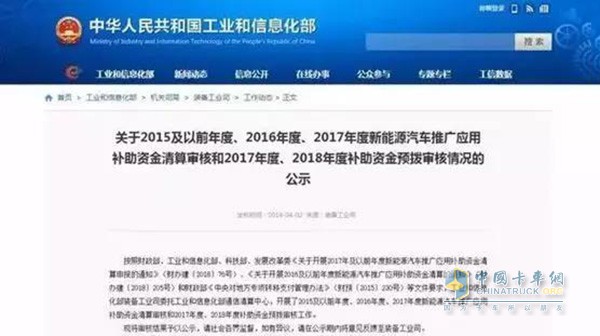 On April 2, 2019, Ningde era and Kstar signed the "Joint Venture Contract of Ningde Era Keshida New Energy Technology Co., Ltd.", in the hope that both parties can play their respective advantages to jointly establish a joint venture company to produce, manufacture and sell Products with integrated market competitiveness, such as quality and price, which are related to energy storage, charging piles and â€œlight storage and chargingâ€, meet market demand, and have long-term goals of profitability and sustainable development. This time, we will focus on the development, production and sales of energy storage system PCS, special energy storage PACK, charging pile and "light storage and charging" integration related products.

The actions of the giants are always strikingly similar. While the Ningde era was released into the field of energy storage, BYD also won a large inventory of energy storage overseas. Recently, BYD and the Mexican energy fund organization Pireos Capital signed a cooperation plan for 100MWh battery energy storage system, and officially launched the largest "photovoltaic + energy storage" new energy project group in Mexico's industrial and commercial sector. The size of the 100MWh order signed this time is equivalent to the total electricity consumption of about 30,000 households in Mexico. Both parties plan to complete more than half of the contracted installed capacity within 12 months and are actively engaging with major new energy engineering installers.

In addition to the field of energy storage, the application of power tools, some companies have also begun to attack, and won the big order.

On April 4, 2019, Aoyang Shunchang issued a notice stating that Jiangsu Tianpeng Power Co., Ltd. (hereinafter referred to as â€œTianpeng Power Supplyâ€), a subsidiary of the company, and Jiangsu Daye Electromechanical Tools Co., Ltd. on April 3, 2019 ( Hereinafter referred to as "Jiangsu Dayi", the "Strategic Procurement Cooperation Agreement" was signed for Tianpeng Power Co., Ltd. for the development, manufacture and supply of Sanyuan cylindrical lithium battery cooperation for Jiangsu Dayi. Jiangsu Dayi intends to purchase 150 million pieces of various types of ternary cylindrical lithium batteries from Jiangsu Tianpeng in 2019, 2020 and 2021. The actual quantity is subject to the actual order.

On March 29, 2019, Haofeng Lithium announced that the Zhejiang Lithium Solid State Lithium Battery Technology R&D and Industrialization Project failed to complete the second due to the adjustment of the site selection of the pilot production line and the overall delay in the construction progress. In the performance appraisal indicator, Yanfeng Lithium will not honor the second phase of the project. What is hidden behind it is that Lifeng Li Industry attaches great importance to the industrialization of solid-state batteries.

It is reported that the Xinwangda Power Battery Project is newly established as a production base for the power battery project in the Management Committee of the Nanjing Lishui Economic Development Zone Management Committee. It is mainly engaged in research and development, production, testing and sales of power battery cells, battery modules and battery systems. Business activities such as operations and operations are the mainstay of capital operations.