Recently, Mercedes-Benz Daimler announced the launch of the pure electric heavy truck UrbaneTruck. Electric car giant Tesgar also threatened to start developing electric trucks. Last month, Yuchai and Beiben jointly issued a statement that the two parties would cooperate to produce methanol cars. Several news broke out one after another. It seems that we have once again seen the determination of domestic and foreign car companies in their efforts to seek alternative energy sources. So what exactly is alternative energy? In the field of trucks, what kinds of alternative energy sources can be applied? From the following article we can make an understanding.

In recent years, global warming has caused severe urban air pollution, frequent smog, and deteriorating human living conditions. Although there are various factors that cause environmental pollution, fossil fuel combustion cannot be denied, and the exhaust emissions from motor vehicles have an unshirkable responsibility. Coupled with the limited availability of oil as a non-renewable resource, humans have to seek new solutions. Compared with ordinary cars, trucks travel longer hours each day and consume more energy and costs. Therefore, the development of pure electric trucks is more meaningful for the implementation of energy-saving and emission reduction targets. Pure electric trucks rely on the advantages of green environmental protection and zero emission. Once they have emerged, they are highly sought after by domestic and foreign automakers.

Whether it is North America, Europe or Japan, the research and development of pure electric trucks has accelerated in recent years. The models cover both heavy and light models. The most famous cases in the past two years include the use of the "TransPower" powertrain installed at the Port of Long Beach in the United States, a pure electric heavy truck produced on the basis of the International Truck Corporation, and the UDE Electric Demonstrator, a pure electric light truck introduced by Volvo's famous Japanese brand UD Trucks.

Judging from the current market situation, domestic pure electric trucks benefit from the advantages of zero emission and no pollution, and their access to the city is not limited, especially in big cities such as Beijing, Shanghai and Shenzhen. However, the editor of the truck home interviewed dealers and learned that ordinary electric vehicle truck owners do not buy much. The lack of domestic charging piles, short battery life, long charging time, and whether the subsidy can be truly implemented are all factors restricting users' car purchase. Energy saving and environmental protection is not just a slogan. The development of pure electric trucks is still a long way off.

Although pure electric trucks rely on electric energy as a source of power and will not produce exhaust gas pollution, their batteries have been criticized by many environmentalists. They believe that the first electricity generation method in electric vehicles is not environmentally friendly. The development of pure electric vehicles only transfers the polluted areas and concentrates the sources of pollution. Secondly, in addition to the collection and storage of land and landfills in China, there is still no industrial chain for recycling. Battery recycling is not environmentally friendly, but it is just a change of pollution. However, we will not talk too much here.

Natural gas trucks are more environmentally friendly than ordinary diesel trucks, and their emissions contain no sulphides and lead. In addition, natural gas is fully burned, heavy hydrocarbons are not produced, carbon deposition is not produced, lubricant oil is not diluted, and component wear is reduced. This can effectively extend engine life and reduce maintenance costs. All these advantages have allowed natural gas trucks to achieve good sales for a period of time. However, with the decline in domestic oil prices in September 2014, this market has begun to decline.

In addition, the natural gas vehicle body re-pull goods less, lack of power, the toll is still high, so that those who wish to do more quickly run the car owners have no desire to buy. With regard to supporting facilities, the shortage of refueling stations and the inability to provide after-sales service for vehicles have also been the main reason for the obstruction of this model.

Therefore, due to the constraints of the above factors, the future development of natural gas trucks will not be very optimistic. Although they have an advantage in environmental protection, they are not used for the majority of drivers who run cars to transport, and the lack of market is also insufficient. odd. The editors of the Truck House learned from the interview that because there was almost no market, many dealers stated that they did not have any models in this area and they were not very optimistic about the development of natural gas trucks in the future.

â— clean hydrogen fuel cell technology is difficult to ensure <br> <br> In addition to electricity, natural gas, some of the car companies in the development of zero-emission vehicles Shihai their sights on another clean energy - hydrogen. Hydrogen has a high thermal efficiency and the only product after combustion is water without any pollution. At the same time, hydrogen can be obtained through ionized water, and there is a large amount of water on the surface of the earth. Theoretically it is almost inexhaustible, which is a very good alternative fuel for the increasingly scarce oil resources.

With regard to the use of hydrogen, car manufacturers have proposed two ideas. Some car companies are committed to retrofitting existing engines to make them suitable for hydrogen combustion. The advantage of this method is that it makes use of the already mature mechanical engine technology and it is easier to implement. However, it is difficult to guarantee the reliability of the piston by burning hydrogen.

Another part of the car industry proposed the production of hydrogen-fueled batteries to power cars. The principle of a hydrogen fuel cell is not complicated. It uses the simple reaction of hydrogen and oxygen. In this reaction, hydrogen will lose electrons to an ionic state. The fuel cell will block electrons through a special ion membrane and only let the ions pass. At this time, the positive and negative electrodes will form in the battery, and the current will be formed by connecting the wires. If the fuel cell is connected to the motor, it can provide energy to drive the motor, install the battery on the car, it becomes a hydrogen fuel cell car.

Many automobile manufacturers in the world have fuel cell vehicle projects, but most of them are in the experimental phase, which proves that the current technology is not passable, and it will take time to prove the future development.

â— diesel blended methanol fuel truck provincial New opportunities <br> <br> last month, Yuchai and North Pennines announced a joint research and development news methanol truck, which makes virtue of methanol develop new energy vehicles development ideas, re-enter people's Vision. Compared with ordinary diesel vehicles, the emission of soot particles from methanol vehicles is even lower. If 30% methanol and diesel are used, it can reduce carbon dioxide emissions by more than 10%. Without the aid of urea, it can reach the national 4 or above emission standard. Leakage to the ground or water can also be quickly degraded by microorganisms in the natural world and is friendly to the environment.

More importantly, methanol trucks can significantly save fuel when they are blended with methanol and diesel. Taking a 10-litre engine as an example, the fuel consumption per 100 kilometers is 40 liters, and the average annual mileage of 150,000 kilometers requires the consumption of 60,000 liters of diesel. If methanol is replaced with 30%-40% diesel fuel, it can save 15%-20% fuel cost under the same circumstances.

In addition, macroscopically speaking, currently China's Shanxi, Inner Mongolia and other places have a serious surplus of coal, and coal is a raw material for methanol production. It is also advisable to promote the transformation of coal mining to a certain extent by solving the problem of coal overcapacity by promoting the methanol automobile industry. Act of.

Using methanol as a clean energy source is not the original idea of â€‹â€‹Yuchai and Beiben. As early as 2012, CNHTC had developed a diesel/methanol dual-fuel truck. Shaanxi Automobile also launched the same model. However, due to various factors, this model has been quiet for several years and has not been accepted by the majority of users. On the one hand, the methanol trucks are not as good as regular diesel vehicles or even natural gas vehicles. The fuel consumption has advantages but is not obvious. On the other hand, there is a shortage of methanol fueling facilities, and the construction of new or existing gas stations is changed to methanol fueling facilities. There is great difficulty.

However, at this year's National People's Congress meeting, Liu Hanru, chairman of China Marlin Xingma Automobile Group, put forward the "Proposal on the Development of Methanol as Fuel for Heavy-duty Vehicles." With the news of Yuchai and Beiben cooperating with the development of methanol vehicles, we will wait and see if methanol trucks can re-emerge development opportunities.

Biodiesel is made from oil crops such as soybeans, canola, cotton, palm, etc., wild oil plants and engineered microalgae and other aquatic plant oils and fats, animal oils, and catering waste oils, etc., and can be produced through transesterification or thermochemical processes. Instead of petrochemical diesel regenerative diesel fuel.

Compared with ordinary diesel, biodiesel has low sulfur content, sulfur dioxide and sulfide emissions can be reduced by about 30%, has good biodegradability, is easily decomposed by microorganisms in the environment, and is conducive to environmental protection. Secondly, biodiesel has good flammability and a high degree of lubrication, which can reduce the wear of engine oil supply systems and cylinder liners, extend service life, and indirectly save costs. The most important point is that biodiesel is a new and simple ecological fuel that can be burned without any special adjustment of the engine, and its investment is low.

However, the raw material of this fuel is plant-based and the cost is high. Therefore, it is crucial to use cheap raw materials, increase conversion, and reduce costs. In addition, the production process of biodiesel is complicated, which adds to the cost to some extent. At present, foreign trucks can burn more biodiesel models than in China.

In this article, we briefly introduced the current market situation of several more popular alternative fuels and corresponding models. From this, it can be clearly seen that electric trucks have become the main force of new energy development. Other types of new fuel vehicles are limited by factors such as cost, price, technology, etc., or they have not been fully developed or have already been eliminated by the market. This shows that the development of new energy vehicles can not be separated from technology, markets, policies and other aspects of support, a simple environmental slogan can not summon the entire market to serve, after all, really save the money bag, is the user's pursuit of the fundamental!

Double Wheel Concrete Pile Spinning/Centrifugal Machine is mainly apply to produce High strength centrifugal technology concrete spun piles of difference diameter and length, Prestressed Reinforced concrete pole(SPC pole) by spinning formed. According to customer's effeciency request, there are Single wheel spinning machine and Double wheel spinning machine at customer's option, it is equipped with a stepless speed-variation motor and a control panel, it works smoothly and its speeder is of wide-range. Its box base is sturdy and durable and easy for installation. 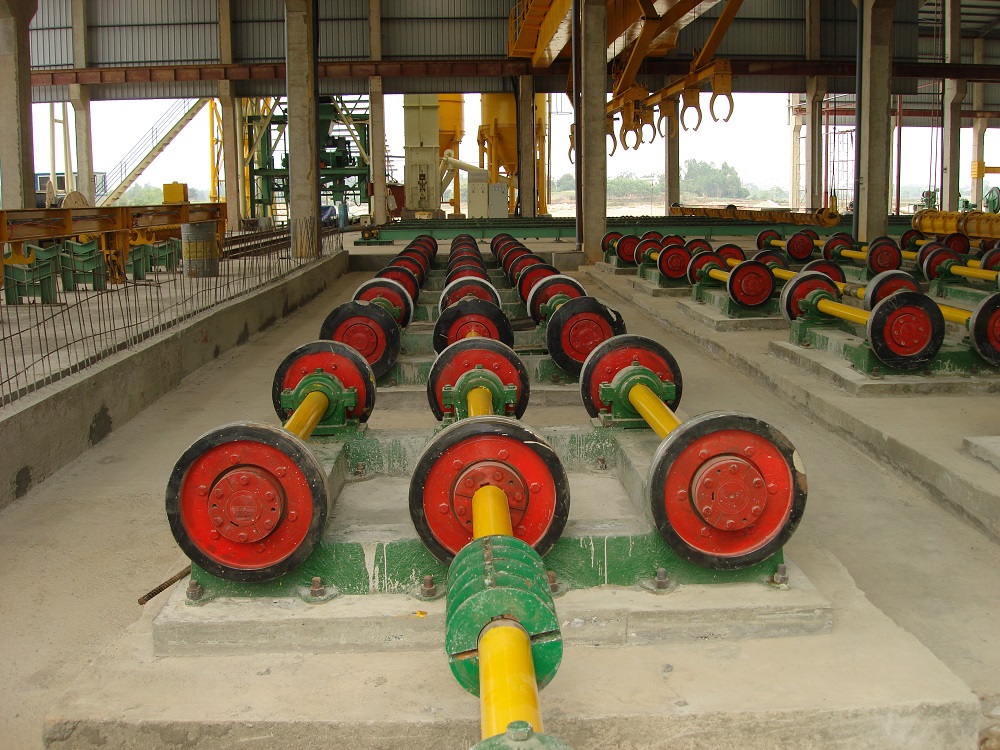 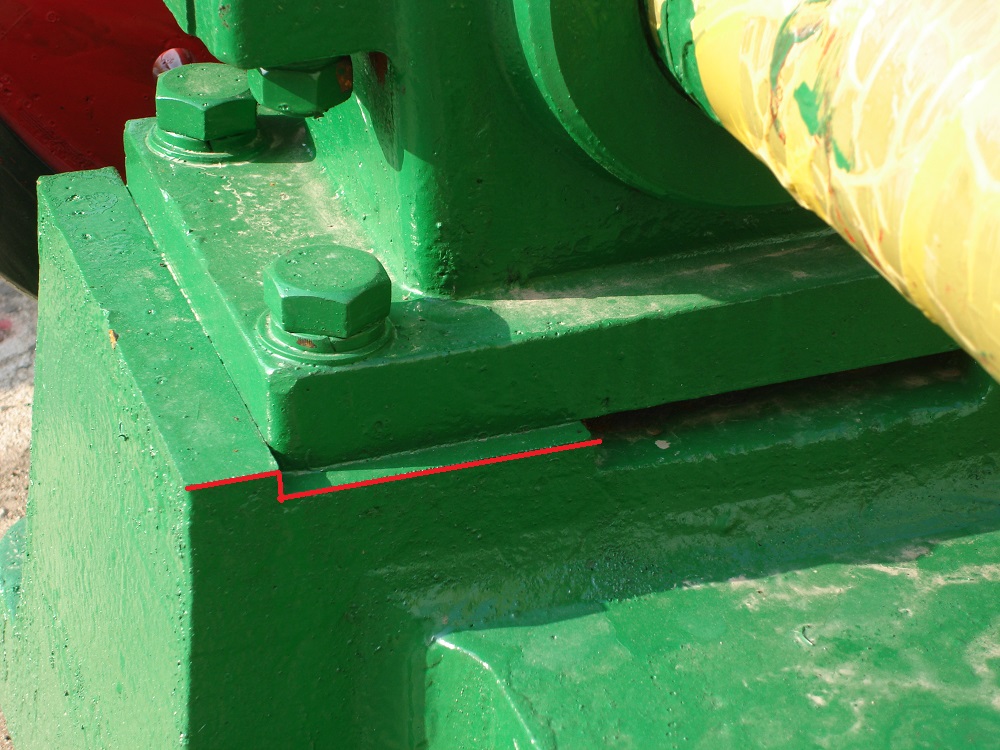 2. Connection shaft is whole shaft, to avoid stress concentration brought by shaft diameter changes, resulting in the phenomenon of "shaft-broken".

3. The limit side of the support wheel is removable. It is convenient for users to replace. 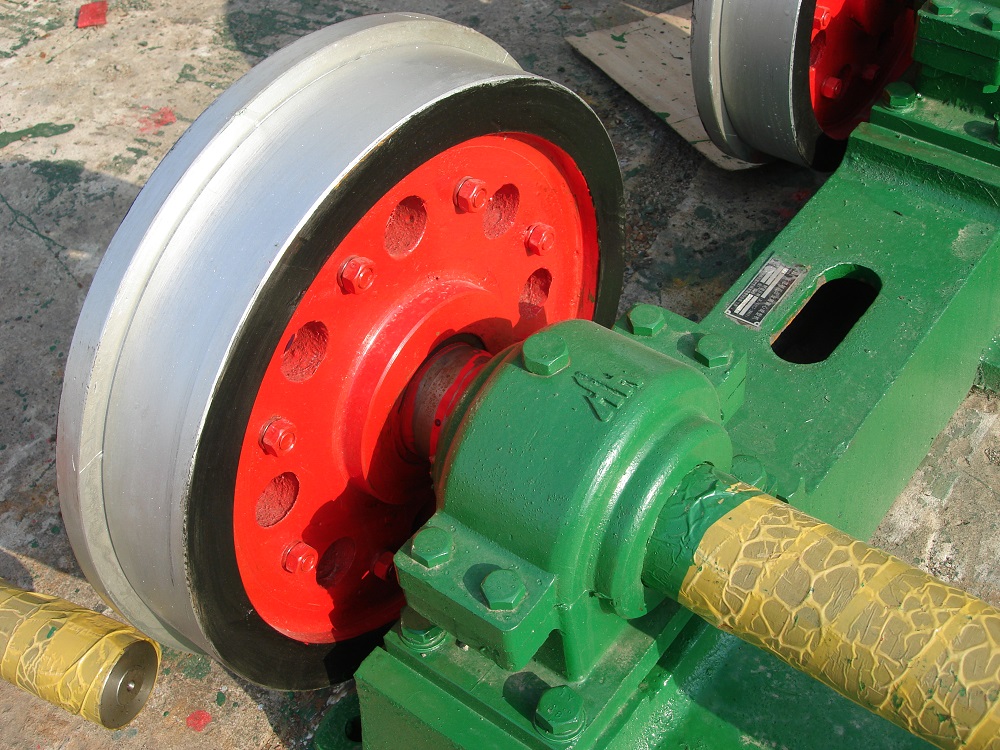 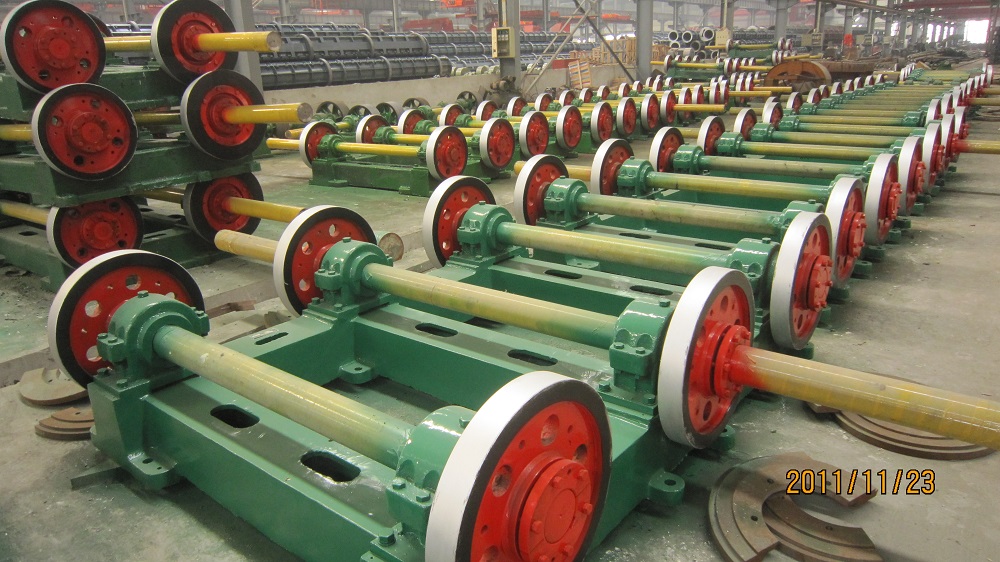 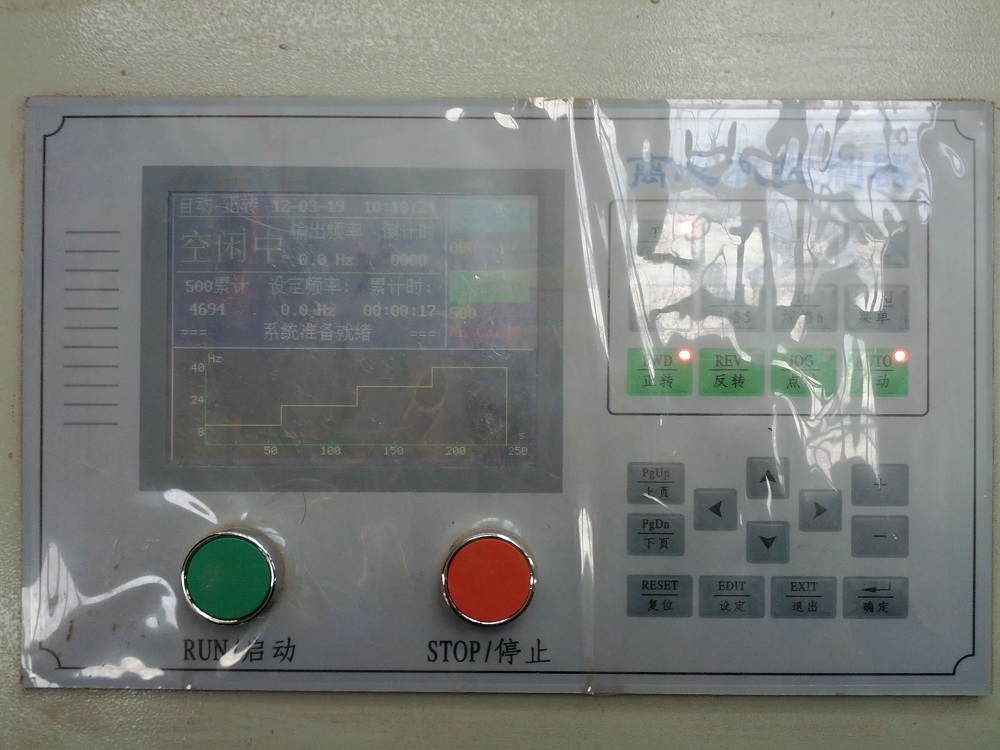 We can customize for you. If you have any questions, please contact with us. Welcome you can visit our Factory.For inqury,Please send mail directly to us.